For two and a half weeks, Maus had nothing to worry about but the occasional bat flying past and the occasional hairball coming up. She and her siblings stayed in luxury, at Chez Grandparents, a tony spot not too far from home, a place complete with a dog to torment and lots of little fake mousies and other toys to toss about. The best part, though, was all the nice old smelly books she got to claim as her own. 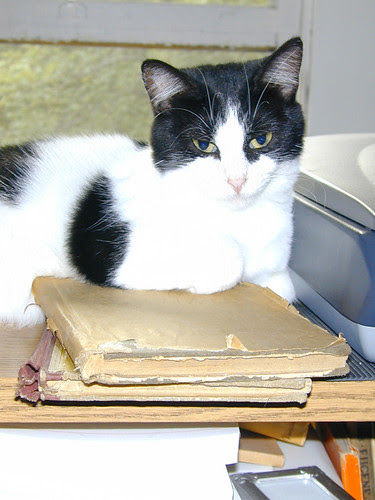 The worst part was getting there and back. The little carrying case didn't muffle the noise of an automobile engine, and getting catnip at the end of the ride didn't really improve things too greatly. 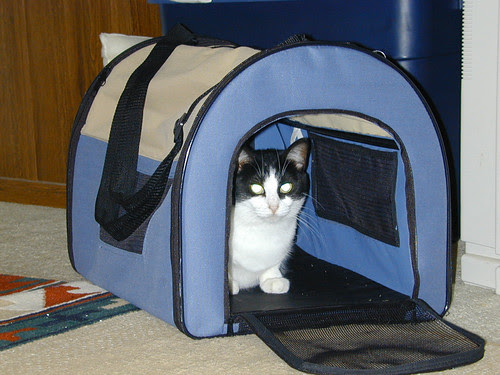 Still, she seemed fully rested when we got home, and she's gone and brought me a couple of dismembered spiders, just to show she's not out of practice at the hunting thing...

For more beasties of all skill levels, don't forget to check out Modulator's Friday Ark #206, and, on Sunday evening, be sure to stop by the CotC, this weekend to be hosted by the crew at Artsy Catsy. Don't miss them!
Posted by leucanthemum b at 8/29/2008 12:20:00 AM

Spiders? Is that all?

Mystery just brought a live bat into our house. We spent 15 minutes of what turned out to be aerobic exercise getting it back out again.

Sadly, while on vacation, Maus, Peanut and TiGrr tag-teamed a bat from the folks' house into the next life. We discovered it mostly dead, in the kitchen trash bin, and had no Miracle Max to revive it.

Now that I have them all back home, the only good prey is BAHSes (Big A** Hairy Spiders -- not too unlike the ROUSes, or Rodents of Unusual Size, which challenged Buttercup and Westley). Although last winter, they provided me with a couple of wee mousies.

I do have to keep their shots current.