She walks in poopy, late at night,
Then down the hall and 'cross the bed
O'er all the linens clean and bright,
To settle down upon my head;
Then acts offended at the sight
As I scrub out the reeking tread.

Earworm of the Day: 'Concrete And Clay'

Let your day be a little less crumbly. Unit 4+2 has your back… or at least your ear, for a while.

The Sky Is Always Falling for Some People

I was having a romp on one of the popular-with-idiots-and-journalists (but I repeat myself) social media sites, last evening, and ended up going on a bit of a rant. It went like this:

After presenting a few basic facts on a guy's thread refuting his claim that restricting abortions means women will die from untreated ectopic pregnancies, I've just been told "You're obviously a dude with no empathy so bugger off".

Since my “dude” vagina and I are no longer welcome to clarify, there, re: why I’m not in a panic over the Roe “trigger” laws, I thought I’d put a few of my points here. I’ll start with the biggie: what does the MO law (the one everyone keeps citing as most restrictive & therefore “dangerous”) actually say?

If a hospital lawyer decides staff must wait until medical emergency becomes life-threatening crisis before treatment, and the doctors follow lawyer’s advice instead of protecting the health & life of the patient, the hospital should be in for a MASSIVE malpractice lawsuit.

Of course, the immediate response I got was “It’s happening already! There were nurses posting on their social media about it!” My reply: “It must be true because I saw it on social media! (eyeroll emoji)”, which was deemed, by them, a copout. But I’ve fallen for a few fairy tales on here, due to confirmation bias. I’m not saying it never happened…

but unless someone actually follows up with, say, multiple witnesses, some documentation, & maybe, a lawsuit or two, I’m inclined to have my doubts. It’s too easy for someone to hide behind credentials to push an agenda. Granted, that goes both ways, but (and here’s what started the shift of my own opinion on the issue a couple of decades ago), the pro-abort crowd has a longer history of lying.

First, they swore that all they wanted was simple legalization, to stop back-alley abortions & save women’s lives. Remember “safe, legal, and rare”? But, once legalized, the pro-aborts turned a blind eye to Kermit Gosnell’s charnel house for DECADES. https://www.washingtonexaminer.com/58-horrific-details-from-the-kermit-gosnell-trial-that-you-do-not-want-to-read


Next, it was “we’re pro-choice, not anti-abortion”. https://www.washingtontimes.com/news/2022/jun/8/churches-pro-life-centers-attacked-supreme-court-a/

Under the new ruling, with trigger laws, “some states have NO exceptions.”  https://ussanews.com/2022/06/28/fact-treatments-for-miscarriage-and-ectopic-pregnancy-are-legal-in-every-state/

“It’s a private matter between a woman and her doctor only.” Baby makes three.

Anti-abortionists only care about making sure the baby is born. They don’t care about its life afterward.” 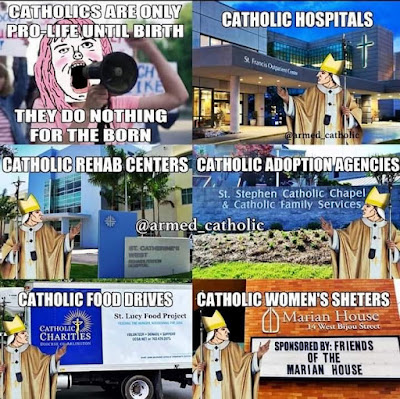 “You want the fetus to have more rights than the mother.” No, we want the baby to have the *same* right to life his or her mother has.

And here's where I answer the "no empathy" part: I've been through an unexpected pregnancy or two. One was ectopic, and I almost died before I got treatment. That was because I was *ignorant* of my condition and the laws.

When you deliberately lie in order to make people afraid to (a) seek help and/or (b) give lawful aid, you endanger lives just as surely as though the laws actually read they way you claim they do.

That's all I have, for now.


I could probably have found a few dozen more to share, but I got tired. These people & their shamelessness exhaust me.

I'm a bit agitated, lately, but Mother Nature seems to have arranged a good workout for me, this holiday weekend.

Yesterday started off pretty nicely. The sun was shining, the birds were singing, and the geranium was just beginning to bloom again after being transferred from the dining room to the front yard. 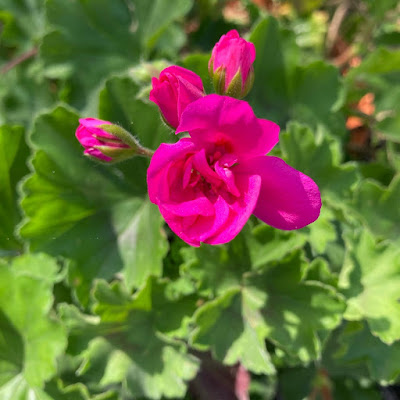 And then the sky darkened, the city emergency sirens started howling…

big-ass hailstones poured down from above.

Maybe now we can persuade the neighbor to take down that weed tree, though. Neighbor guy seems somewhat more amenable, since he is currently the one with the chainsaw chores, now that Pop's gone on vacation.

It would be nice if his girlfriend agreed to our removing that thing.

Meanwhile, I'll be out there figuring out how to make portable, pop-up protection for my precious plants. Before we get more of that kind of weather, man.

For someone who has been trying to collect just postcards, I certainly am discovering a lot of not-postcards in those albums and cases.

They're getting moved to a home or two where they'll be better appreciated, but in the meantime, they got the royal digitization treatment: brightened, contrast boosted, yellowing/sepia corrected back to original black & white (and, on a couple of faces, some traces of post-darkroom rose paint on the cheeks), and larger blots and blemishes cleared away.

They look like nice enough people, they deserve a chance to be seen clearly again.

Postcard of the Day: Fair Warning

this postcard is about 115 years old. So the joke is even older.

In case you were going nuts wondering.

Postcards of the Day: Party Time!

This week, Pop celebrates the 90th anniversary of his birth. I'm baking a pie or two, in honor of the occasion, and we'll have a bit of a celebration with our closest friends.  First we send the invitations,

and wait for the replies

Then there's the party, followed by the realization that we were FAR from politically correct in our conduct…

but nobody around here really cares.

It's just how we do things, here.

And maybe in Kansas City, too.

Partial Photo Packet of the Day: Scenes from Monmouth College

These pix are numbered as though from a set, likely a small souvenir packet of scenes from around campus – or even around town. Clearly, I don't have the envelope/pouch/packet they originally came in, let alone a complete set. Still, I have learned something today (I might have known this long ago and forgotten it, but I prefer to pretend my memory is less flawed than that): 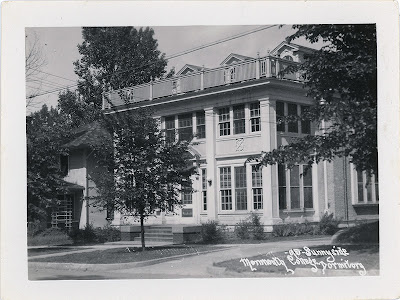 the music building, long known as Austin Hall, had once been a dormitory called Sunnyside. I lived in an apartment next door to that place for a couple of terms, and knew it had been a dorm, all right, but Sunnyside? Really? What's up with that?

I suppose, since it was on the east side of the street, opposite campus, there's a logic to the name, but… wow.

Anyway, no surprises with the other four snaps of my old stomping grounds.

Postcards of the Day: Fishing for Laughs

I feel that way about baking, as well as fishing. But not necessarily fishing while baked… 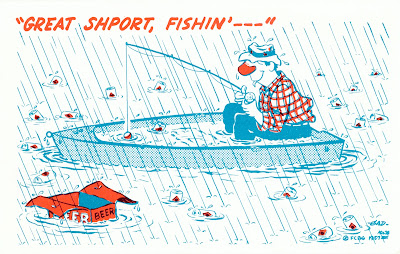 Not sure what one can catch, other than a cold (or, maybe some serious heck from the authorities, for his technique.

But then there's always the girly fishing style... for a different sort of catch. 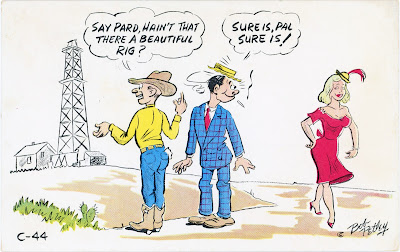 Postcards of the Day: A Little Travel Humor

Today is a day for shifting from my chair as little as possible. I've already been out and about, a small amount, this morning. This afternoon, I'm putting my feet up and taking in some time with a cat snuggling on my chest, because she requires it.