Poor Clyde! Somebody messed with his mind, today. 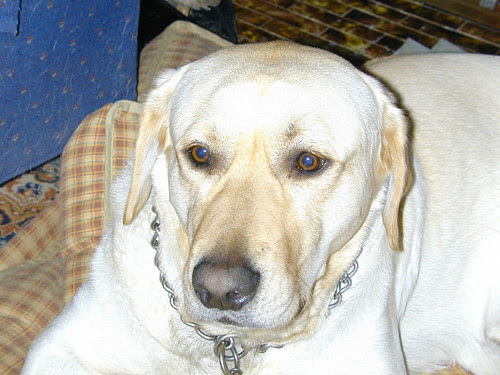 Grammaw and Grampaw have gone away for the weekend, and they gave him no warning!

He's become accustomed to the harbingers of doom (three cats) arriving a day or two before people go away on trips, since it's usually the folks who travel, and I bring TiGrr, Peanut and Maus over to the folks' place to house-and-dog-sit. And, since we've had a few unusual events over the past year, the cats have come, every time, at least a day or two in advance of the trip (actually, in two cases, we were here more than a full week ahead of schedule, due to power outages at my house).

So, imagine Clyde's surprise when, this morning, the geezer and the old bat packed their suitcases into their car and left, while no cats sat and switched their tails from the windows! The cats and I came over here nearly two hours later -- after I attended to another set of beasties I'm sitting for the weekend.

He's slightly less-distressed, now that we've been here half the day.

He'll be even better when the folks come home.


Don't forget to visit Modulator's Friday Ark, for other beasties!