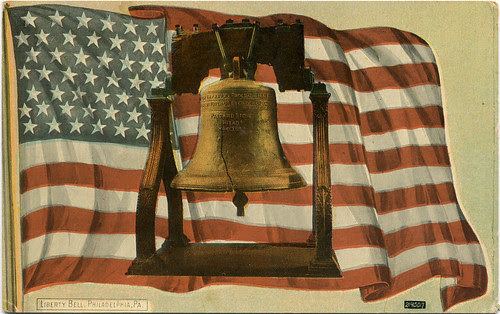 I don't care much for fireworks, but I still eagerly anticipate Independence Day each year. It isn't just that I love the Sousa music, or that I love this country, but that this day means so much to every American. This is the day we, as a nation, decided we must stand on our own feet, independent of the protection and the burden of our mother country.

We really didn't have a very good reason to thumb our nose at the King of England, after all. As colonies go, we had a pretty good life. Our tax burden was modest -- smaller, in fact, than many royal subjects "back home". The benefit we received was pretty darned great, as well, since the Royal Army had just saved our land from the encroaching French frontiers, as part of the Seven Years War (our part of which we conveniently named for the enemies -- the French and Indians -- so as to separate ourselves from our historical, moral obligation).

Nevertheless, we were an adolescent people, led by a group of hotheads and a few relatively temperate souls. We sought our own, separate identity. We were sure we deserved to be treated as equals in every way, so we issued the Crown scathing insults: you're a crummy father, you're a bully, you never let us have anything we want, and, besides, you never asked us if we wanted to be born into this family, so we want out.

We got out. We, as a nation, took our chance to grow up. It wasn't easy -- nothing of real value is. Thousands of lives were lost. Families were rent in half. It was years before the initial war ended, even more years before we had a stable government -- nearly a century, really.

As a result, we have every reason to take pride in our accomplishment, to stand free, to keep a democratic republic running fairly and, for the most part, to do so honestly. We have continued to grow and learn from our mistakes. We aren't perfect, but, by God, we're becoming grownups, by God, we're family, and by God, we try.