We had our usual Independence Day Picnic a couple of days early, this year. It was Saturday, the 30th of June, instead, because that was the day we could get everybody together. It wasn't really planned as the Independence Day Picnic, though. The mob gathered at my folks' house so that the Manly Men could repair the garage roof.

Nobody wanted to see Pop work himself to death all on his own out in the summer heat. So, we ended up with a darned good crew of volunteer roofers woofers. And, while all the guys were hammering away at the rafters, Mom was in the kitchen... sort of. We set the lunch table picnic-style, and then let folks take what they wanted, when they needed it.

Among those who came to help out were the German house-guests of one of the volunteers -- a man of my generation and his eleven-year-old daughter. Sadly,there is very little to do, in the folks' house, for a young tween who speaks little English. There were no other kids her age to play with her. In order to give her something to keep from going mad with boredom, I lent her my camera. Here are just a few of Hannah's very nice pix: 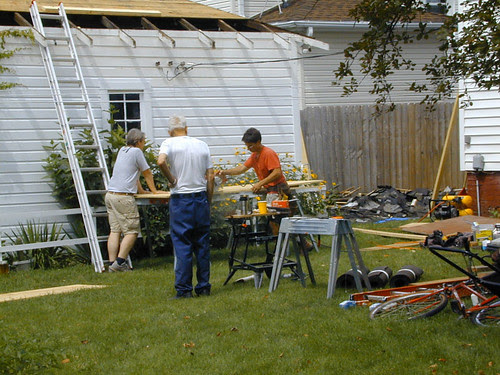 Hannah's father, my pop, and Tim on the project 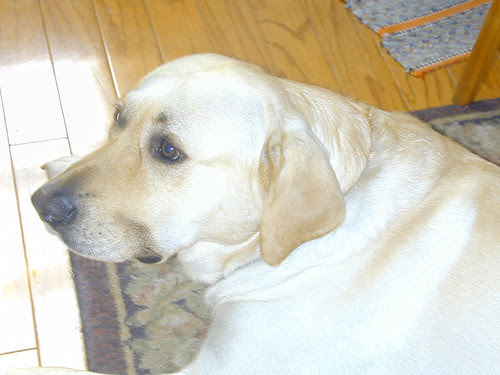 Clyde underfoot in the kitchen 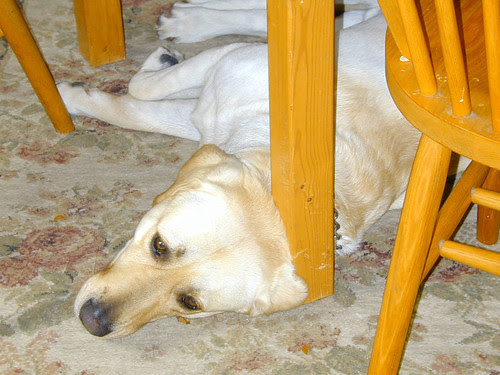 Giving up mooching as a lost cause.
I think Hannah really liked Clyde. Of course, I can fully understand it, if she does. And, Clyde didn't seem to object, at all, to the attention.

For the record, and despite the pitiable expression on his face, Clyde did not go without picnic treats. There was a two-year-old at the scene, after all, just waiting to share with the nice doggy.