Peanut has, since Wednesday, been confident enough to move out of the safe confines of the guest bedroom and explore the house (knocking stuff of Mom's counter, popping open the kat fud bin, and other such delights of feline activity). TiGrr, on the other hand, is a middle-aged conservative. He sees the big furry thing, 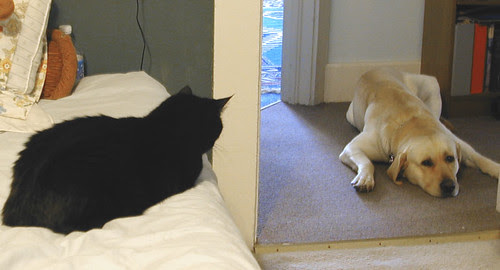 So he stays in position and trusts nobody.

I think he's still p*ssed at me for bringing him here.

Oh, now look at that poor woofie being so patient and sweet...
You big old brute TiGrr you !!