Clyde has accompanied me outside these past few days as I tend Pop's garden and reap the rewards of the folks' having gone away during the peak 'mater season. He snuffles around the brush pile, and occasionally gets a leaf or a large dried blade of grass stuck to his lip. And so I thought nothing of his approaching me twenty minutes after the garden run, with this face: 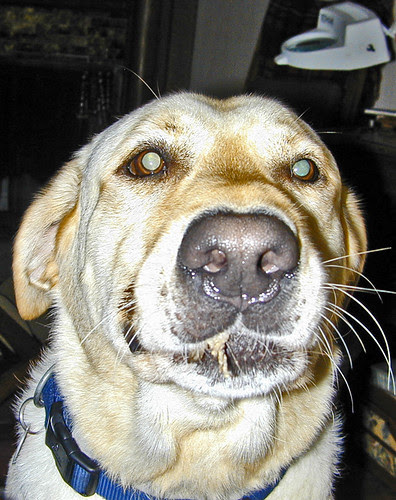 I figured it was another leaf.

Yesterday morning's very windy thunderstorm had apparently emptied a couple of birds' nests, and Clyde had found a literal windfall. He had been cradling the carcass of this grackle chick around in his mouth, tenderly, for nearly a half hour before he convinced me I needed to ask what he had.

He dropped it in my lap, kind fellow.

I persuaded him to take it outside and leave it there, in exchange for a couple of nice, big biscuits. It was, however, a hard sell.